Dear friends the idea of Christian Postmodernism is a fable which needs deconstructing.

If you believed postmodernists (even they don’t truly understand what they believe)  and it takes years to master, a bit like jujitsu. Of course unlike ju-jitsu there is no grand masters red belt at the end of the study period, just a lot of doubt.

But what is it?

Well, postmodernism is at the core of a ideology best described as ’emergent church philosophy and doctrine’, it goes something like this, the big meta-narratives e.g.  Creation or other such stories which explain a Christian worldview are all suspect. But why you may reasonably ask? Well in the mindset of the postmodernist; and this is a key idea found in the writings of emergent church leaders, the church and these  meta-narratives have been used abusively, this forms the principle reason for refusing to accept such biblical stories as they are or have been passed down.

Well at this point you feel like asking so what? We live in a fallen world what do you expect? People including Christians do from time to time abuse authority and position, but perhaps the intellectual naivety of using the unacceptable behaviour of individuals to  rewrite the evangelical understanding of the scriptures is completely lost on postmodernists or non discerning Christians, at least liberal theologians don’t pretend that they believe the word of God to be literal. So why don’t postmodernists just come out?

It gets worse, by intimating that the meta-narratives, or other stories explaining a biblical worldview on morality like “the tower of Babel” and “the family construct ofGenesis 1-3)” are full of mystery, coupled with their belief that our understanding is limited by our comprehension of  and distance from the times and culture written about, both takes away from God’s  ability to communicate effectively or clearly his “word”  to human beings and secondly shuts down any true spiritual debate on the scriptures, a subject I will come back to later. And so here we come to the crunch. For the postmodernist there is no such thing as absolute truth, for the supposed Christian postmodernist (a contradiction in terms) truth exists but we can’t be certain we are right.

But what is the Goal of this philosophy?

The goal of the supposedly Christian postmodernist is  to deconstruct our unfounded beliefs, and according to them it is probably best done without going to church to learn. Apparently we don’t  go to church to learn but to worship and fellowship, they believe the church is arrogant anyway because it claims to be certain, to have truth. This alone should give the Christian pause to understand that Christian postmodernism is an intellectual trap which becomes for those who enter a maze, and unfortunately for Christendom it is the intelligent it seeks to trap.

The goal is to encourage the Christian to embrace doubt. This is a problem for the postmodernist though because Christ asks us to believe and not doubt, so how does the postmodernist try to get behind this injunction? He encourages us to ask many questions and never gives real answers, enough questions to make the Christian become unsettled in their faith this is the true work of deconstructionism.  Although they propose that Christian faith is the blind embracing of dogma they are wrong, true faith  is the doorway to mystery, a mystery which becomes a relationship. Yes, the journey is fraught with doubts but  you get to know God as a friend true to his word (mark 4:11).

In Jesus day the Sadducees were the compromise liberals of his time. Social status was very important to them they were that aristocratic elite of their day.  Josephus the historian labelled them as those who gain only the rich. They were cultural accommodators who did not really believe in a supernatural worldview, there were no miracles, no resurrection, no angels and definitely no intervention of God. Postmodernists remind me of such, the idea that God could actually give humanity untainted scriptures meant to be a blueprint for life is just too incredulous.  Ultimately deconstructionism is the playground  of the educated but disillusioned Christians, usually middle aged and more likely than not western. It is the hiding place of backsliders. An intellectual approach that salves the conscience.

In search of truth

Knowing God is at the heart of the Christian message and the key to relating to God is called faith. Now emergent church says certainty is the opposite of faith? This is strange as the Greek  word for faith  is from the a root Greek word which means to be convinced or persuaded (Heb 11:1). faith is being  sure so how can certainty be the opposite of itself? Again an intellectual folly to which the postmodernist is blind. Yet so called Christian postmodernists use the intellectual argument a lot “if it is a blind leap it does not warrant the time “true education” warrants is their view.

Biblical truth starts with knowledge of the divine (Heb 11:1-3). James the brother of the Lord rebukes those who simply have faith but do not live out their faith with work that show their faith. Faith comes by hearing the word of God (Rom 10:7-10). Those who truly understand realise postmodernism is actually seeking to undermine such faith with the never ending questions that produce in their words “doubt”.

Faith produces overcomers (Heb 11:4-11),  people who please God by what they give like Abel, or how they relate to him like Enoch who overcame death itself, or Noah who built an amazing ark all the bible says gaining what was promised (Heb 11:23) faith is not blind believing it is a relationship with the divine that Christ encourages us to believe and moves mountains.

The consequences of postmodernism

I used to be worried about it, but now I realise it is a straw man. Unfortunately though morality is the casualty as behaviour is not challenged why should it be, if behaviour of people in the bible is purely culturally relevant then we should not apparently judge behaviour. An interesting notion when for the true Christian we understand from Christ that  fruit indicates the validity of a claim to Christianity.

For the Christian postmodernist the proclamation of the gospel and evangelism stops and all the claims of Christ are called into question how can he be the truth (John 14:6) and even if he said this what did he mean by it, if culturally relevant how can we truly understand it and so on and on it goes.

And so I declare with a great deal of certainty Christian postmodernists have more in common with the ostrich or other creatures that bury their heads in the sand, the first generation may be Christians but those who follow them will most likely not be,  I would go as far as saying they are certainly not doing the work of the Lord.

Enjoying some down time with Fiona and boys http:/… 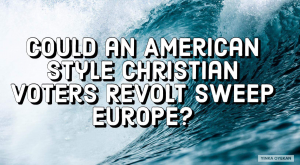